Weight is one of the biggest challenges facing the drone manufacturing industry—and one of the biggest considerations the enthusiast drone user should keep in mind when looking to purchase a drone. A drone is said to be a heavy lift drone if it's capable of lifting a payload of any practical size—the weight of a pizza, a delivery from Amazon, or, as is the case in most instances, a camera capable of shooting video footage.

1. What Is a Heavy Lift Drone?

Most drones try to strike a balance between battery weight and flight time, but a heavy lift drone does more than that—it is capable of lifting more than its own weight. Through the same kind of advances in battery design that make longer, farther distance flights a possibility, these heavy lift drones can fly "missions" that allow them to transport items like snake antivenom in the Amazon or HIV medication in Africa: both things that heavy lift drones have been used for.

2. How Much Weight Can a Heavy Lift Drone Carry?

The answer depends on a lot of variables—the size of the drone, the weight of its battery or batteries, and the distance or time spent airborne. Weather can also affect this, as a heavy lift drone in strong wind will have less battery life as its engines compensate to keep it on track and level. Cold weather can impair a battery's function, and a large or aerodynamically unwieldy package (like a pizza box) will also affect how much weight a drone can carry, and for how long.

3. How Does a Heavy Lift Drone Work?

A heavy lift drone will usually have four—or more—rotor blades positioned at the outer edges of the drone's air frame. This way, the drone doesn't have to make mechanically complex adjustments of a single-rotor design the way helicopters do or manage long horizontal take off and landing paths in the manner of a fixed-wing drone. A heavy lift drone is capable of vertical take-off, with the payload affixed underneath its airframe.

4. Where Can You Buy a Heavy Lift Drone?

Each example of heavy lift drone we review below is available from online retailers like Amazon. They are also available directly from the drone manufacturer, and in some hobby or RC enthusiast supply shops.

5. What Use Does a Heavy Lift Drone Have?

As we mentioned above, most of the time a heavy lift drone will be carrying a camera as part of its payload. In some instances, they have been used to airlift medicine to people in remote locations, and various companies are testing drones for delivery of everything from pizza to small packages.

The following drones were reviewed based on their features, commercial availability, price, maximum lifting weight, and pros and cons. Our team of experienced drone experts examined popular consumer drones and carefully selected each drone on this list as an example of a heavy lift drone.

On the low end, the cheapest drone we'll be reviewing is the DJI Phantom 4, which costs approximately $940 online, and at the high end we have the Freefly Alta 8, which will run the aspiring heavy lift drone operator around $17,500. The more expensive drones, generally speaking, are capable of lifting more weight and in some caseswere designed strictly for that purpose. It bears mentioning that we only considered consumer-level drones available from online retailers or other consumer outlets and have not considered the heavier, industrial drones which generally aren't available on the retail level. 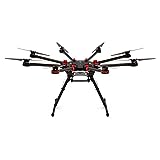 The DJI S1000 is well known for being a durable, well-built drone, but many don't realize this octocopter (featuring eight rotors) can also be used as a heavy lifting drone. The DJI S1000 has a fifteen-minute flight time and can lift a payload of up to seven kilograms, or fifteen-and-a-half pounds. That's more than enough power to carry even a large digital camera—or up to eighteen medium pizzas. The DJI S1000 would make an outstanding video shooting platform, as its designed with vibration dampening to ensure a smooth, stable, jitter-free flight.

The DJI Matrice 600 was designed for professional video cinematography and for applications like civil or industrial imaging, as it can be fitted with after-market LIDAR or infrared imaging systems used to identify things like underground pipelines or electrical cables. It makes a great heavy lift drone as it is capable of taking off with a payload of about six kilograms, or a little over thirteen pounds. It's known for being an easy-to-pilot drone and has a flight time of about fifteen minutes.

The DJI S900 was designedwith the intent of lifting professional cinematic cameras for aerial shots and is made from strong, lightweight carbon fiber. With an optional 12000mAH battery, this heavy lift drone has the capacity of carrying up to eighteen pounds of payload and flying for about twenty minutes. It comes complete with DJI's A2 controller. 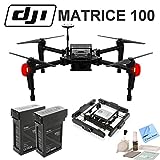 The DJI Matrice 100 was designed to handle many of the complexities of heavy lift drone flight automatically, letting the operator focus on whatever purpose the quadcopter is being used for. It can lift a payload of about 3.6 kilograms, or eight pounds, and comes with an onboard camera capable of shooting 4k video. Perhaps its most useful feature as a heavy lift drone would be its outstanding flight time of around forty minutes. 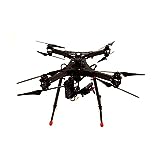 The xFold Travel features a modular rotor system, giving the operator the choice between eight or twelve rotors to maximize flight time, lifting capacity, or speed as needed. It is compatible with any standard professional flight controller and features a unique "hand off" mode allowing a second pilot at the maximum range to assume control and thereby extend its range to twice normal. Used primarily in industrial and search-and-rescue applications, the xFold Travel is capable of lifting a payload of around ten kilograms, or twenty-two pounds.

The Autel X-Star Premium comes with an onboard 4K video camera attached to a one-button, quick-release 3-axis gimbal stabilizer, and is a one of the cheaper drones in our heavy lift drone roundup. It can fly and transmit video up to 1.2 miles away and has dual GPS positioning allowing it to fly autonomously. Its maximum payload is around 1.8 pounds, which is on the lighter side—but the price is right for a heavy lift drone body.

The Tornado H920 hexacopter (with six rotors) was designed and optimized to fit a (not included) Panasonic GH4 video camera and can be fit with a GB603 gimbal to mechanically stabilize the camera and allow it to move 360 degrees. The landing gear of the Tornado H920 retract, offering a completely unobstructed view. It can be retrofit to serve as a heavy lifting drone with a maximum payload of just over eleven pounds. 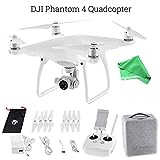 Though DJI's Phantom 4, latest in the Phantom line, was intended to fly a gimbal-stabilized 4k video 12 mega-pixel camera, it makes an excellent heavy lift drone if flown in the "sport" mode, as it's capable of lifting over eight pounds, or 3.7 kilograms. It comes with obstacle avoidance sensors, is constructed of magnesium alloy, and has a maximum range of over three miles. It has a stunning top speed of around forty-five miles per hour and a twenty-eight-minute flight time when unloaded.

DJI's Agras MG-1 was designed and intended for use in agricultural settings as a precision delivery system for herbicides, pesticides, and other chemicals used in farming and nursery work. This makes it an excellent heavy lift drone. It has a range of impressive, highly technical features such as its precision height system, controlled with three precise millimeter wave radar emitters, allowing it to adjust its height automatically with the nap of the landscape. It has a standard operating payload of just over ten kilograms, or twenty-two pounds. 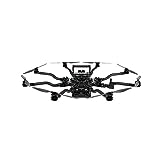 The Freefly Alta 8 octocopter was intended for large cinematic equipment payloads, and as such makes an outstanding platform. It has a maximum payload of 18 kilograms, or just under forty pounds, and a fully loaded flight time of around sixteen minutes. It is the most expensive drone on our list but is an amazing machine, even at its admittedly high price.

Though any of these drones would be suitable for use as a heavy lift drone, ultimately the decision relies on the weight of the object to be transported, flight time and distance, and the ability to make a return trip without swapping out batteries on the remote end of the flight.

The drone that most caught our attention was the fascinating DJI Agras MG1, which is capable of scanning below ground with its onboard radar and capable of highly precise altitude adjustments autonomously. The xFold Travel, with its unique "hand off" feature was another favorite among our reviewers, but the drone we would most like to own is the big one—the Freefly Alta 8.